An “audacious ambition” to put a modern Australian whisky on every bar in the world began with a taste for craft beer back in 2004.

“I soon realised good beer doesn’t travel well and whisky, at its most basic, is distilled beer… and the idea for an iconic Australian whisky we can take to the world was born,” said David Vitale, who founded Australian whisky brand Starward in 2007.

“It was still early days in our appetite for all things craft, but it was really clear we could take it up to the international players with a product that was flavour-forward and stood for something.”

Breaking all the rules to create the distinctly Australian whisky range, the Starward team took “far more of a beer-making journey” in crafting their spirit, followed by “a wine-making approach to maturation” in only Australian barrels that were not re-charred, said Mr Vitale.

“This was new in the world of whisky when we began and still today, there are very few distilleries in the world able to lay claim to maturing whisky in locally sourced wine barrels for their entire maturation.

“It is one of the most vital aspects of our success – the ability to talk about sourcing our products from within a day’s drive of the distillery.”

Born and raised in Melbourne, Mr Vitale wanted to create a whisky that reflected his home city – from the famed microbrewing culture to the “four seasons in one day” climate.

“The inspiration comes from our amazing wine-makers, who have spent the past 30-plus years putting Australia on the map as a credible wine-making country,” he said.

“We want to do the same with whisky.

“So the ability to use Australian wine barrels to do that is such a privilege, and a nice tip-of-the-hat to their hard work in putting Australia on the global wine map. The interesting insight has been that having a diverse set of barrels actually creates light and shade in flavour, to be able to have consistency.”

With a passion for brewing and wine, Mr Vitale said Starward’s single malt and double grain whisky ranges were elementally matured for three “Melbourne years” – meaning the mercurial weather makes the barrels expand and contract more. This not only increases alcohol content – which would usually decline during whisky ageing – but “pushes the boundaries of what whisky can be”.

“We would not have Starward whisky without distinctly Australian ingredients,” said Mr Vitale. 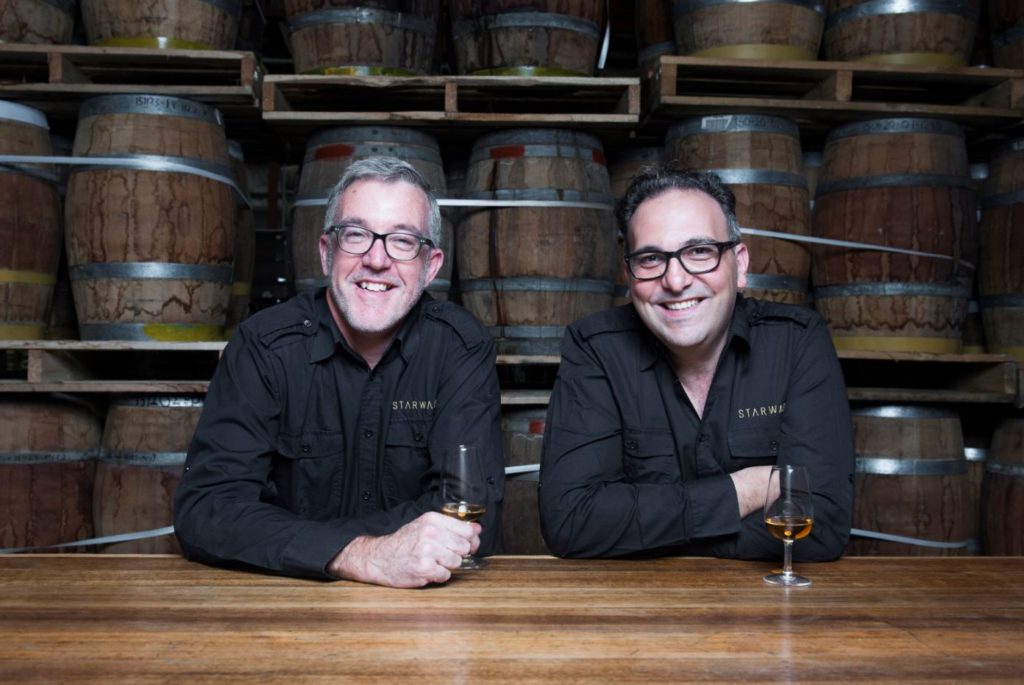 “We really loved the work that Manildra Group was doing supporting the craft spirits scene with their 100 per cent Australian wheat-based spirit, and there was an opportunity to work together to produce a product that would support our ambition to be on every self-respecting bar in the world.

“Together, Manildra and Starward combine wheat and malted barley – the two quintessential Australian grains – to make an approachable and affordable Australian whisky.”

The result – Starward’s Two-Fold Australian whisky – was launched in November 2018.

But unlike almost every new release from Australian distillers, this whisky was not conceived as some super-rare and expensive, single barrel, single malt targeting connoisseurs and collectors.

Two-Fold is a double grain whisky with malted barley and Manildra Group’s wheat-based spirit, matured in Australian red wine barrels, for a beautifully balanced and incredibly versatile sipping whisky retailing at an affordable $65.

“Two-Fold’s launch was a huge moment in my professional life,” said Mr Vitale.

“Our ambition is simply audacious – a Starward whisky on every self-respecting bar in the world. “Two-Fold provides us with our best shot at achieving this ambition and – notwithstanding the 11 years it’s taken to get to this point – I get out of bed in the morning knowing we have a best-in-class whisky and a team in place to achieve this.”

Mr Vitale said that without Manildra Group, “Two-Fold would have been impossible to produce”.

“Consistency is king – particularly as we start to scale up and appeal to drinkers who have us in their sharing cabinet. They are seeking a familiar friend to return to,” he explained.

“The quality, consistency and sustainability of Manildra Group’s operation is in a league of its own in Australia. The whole team have been amazing to work with – from the first day we discussed our idea to our last order, they are practically an extension of our production team.” 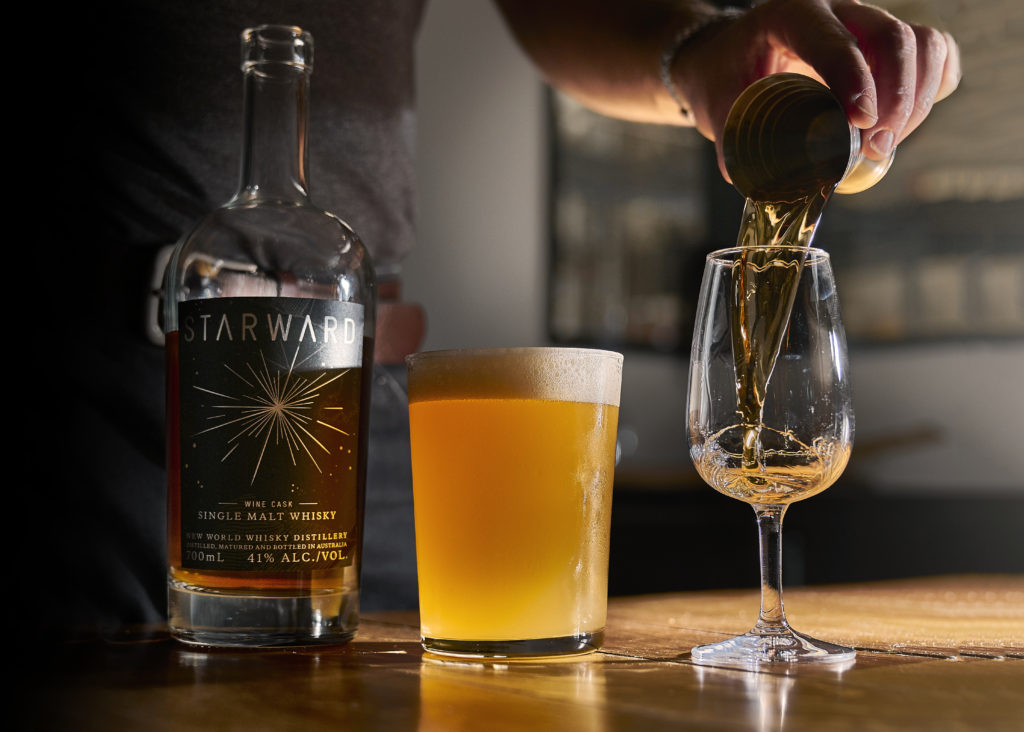 “It’s terrific to support and work with like-minded, Australian-owned businesses such as Starward,” Mr Davis said.

“David Vitale and Andrew Macdonald have revolutionised the whisky industry in Australia – creating full-flavoured, distinctly Australian whisky of world-class quality and craftsmanship that can be enjoyed by everyday Australians.”

Mr Vitale said producing a single malt whisky (from malted barley alone) was “always going to inhibit our ability to fulfil our ambition” due to the scale and cost involved.

“Our view is, if we want to be an Australian icon one day, doing it from the top-shelf of the bar is a very long way to go about it. And that’s coming from a whisky maker who waits three years to bring a product to market,” he said.

“We felt having Starward available to people to try and buy without it breaking the bank was an important part of being a modern Australian whisky.”

The Starward distillery also offers experiences including tastings, masterclasses and other events.

“Story-telling is everything,” said Mr Vitale.

“Our job is to ensure we can share our own story anchored in the Australian ingredients and environment at our disposal to make our whisky.

They are the two things that set Starward apart in the world of whisky, and it’s important for us to celebrate that at every opportunity.”

Mr Vitale said there was plenty of support among the domestic craft distillers industry because “the success of one brand is the success of the industry”.

“I think the industry sees Two-Fold’s launch as a great first rung on people’s Australian whisky journey,” he said.

“My hope is others follow with affordable and approachable Australian whisky – especially in export markets, where we could benefit from building that section of the whisky shelf. It’s hard being a category of one product in those export markets.

“But the appetite for craft whisky continues to grow and the biggest challenge for the industry now is to keep up with demand.”

“We are really happy with the two core products we have on offer – Nova and Two-Fold – and from time to time, we release limited-edition projects and bottled cocktails. Typically, they sell out online within hours, which is a nice place to be.”

The development of export markets – particularly the United States and United Kingdom – would be the focus for Starward’s future, said Mr Vitale.

“Whisky is a patient business,” he said. “The idea to make Starward was born in 2007, it took us until 2013 to launch our first bottle, and the whisky we are making this year won’t see the light of day until 2022.

“So the challenge of funding that start-up, and investment in growing inventory, never stops – there just seem to be more and more zeroes each year,” he said.